The Most Important Number

The energy in the air is electric as we speed toward the Super Bull Summit.

As a team, we’re coming together to share the full details on this phenomenal moment in time to forge legendary wealth … using a proprietary strategy that I’ve had the privilege of spearheading. It’s a strategy specifically designed to find stocks that can soar 1,000% in just one to three years.

While most strategies are fixated on just trying to earn a 50% gain, 100% gain or in the best scenario, maybe 200% consistently — with this strategy, we’re hunting down stocks that could make you fortunes.

Now, of course, when you swing for the fences, from time to time there’ll be a miss. As with anything in the markets, nothing is ever guaranteed. That said, part of finding these big plays comes with having the right tools, experience and data.

I’ve examined more than 13,000 hours of real-time historic market data to arrive at this point. I’ve even personally invested my own money in stocks to make sure it works.

My point is, I’m not giving you theory. This is not some sort of intellectual speculation concocted in an office at an Ivy League college. I’m a real investor, and I’m going to give you a real strategy that could make massive gains in the most profitable market I’ve ever seen.

Sadly, most people do not have this insight into the market. They can’t really determine how to calculate a stock’s potential return, or whether to invest in it at all. They’ve been taught to look at a slew of meaningless data points — information nobody but the greenest researchers on Wall Street look at.

That’s not their fault, or yours. It takes a lot of time, money and obsession. I’ve invested 25 years of my life in it.

This interview I did with Fox Business back in 2011 was just one example:

During that interview, I outlined three investments — Microsoft, Broadridge Financial and Amazon. All of these stocks soared, with Amazon leaping almost 2,000% since.

Today, I’d like to share one of the most vital parts of that strategy, and how not understanding it … how looking at the wrong data … already cost most investors a near 1,000% in gains since that 2011 interview.

The Only Number That Matters

During the interview, one of the anchors mentioned Amazon getting “hit hard” by traders for their earnings reports, and he downplayed Amazon when he said: “Amazon, paying 52 times earnings, one of the reasons it’s getting hit from traders and investors so hard today.”

It had already risen more than 250% from its 2009 low, and investors were still going on about “earnings.”

But here’s the thing: When Amazon hit its peak of $3,000 a share recently, it was trading at more than 144 times earnings — a gain of more than 1,500% from the day I mentioned it during that interview.

And most missed it because they focused on “earnings.” My point is, in a growing company, “earnings” take a backseat. I’ve learned this over nearly three decades of investing — after countless wins and countless losses, after making and losing fortunes and after studying tens of thousands of hours of data.

So, if “earnings” take a backseat, what is the most important number?

Take a look at this: 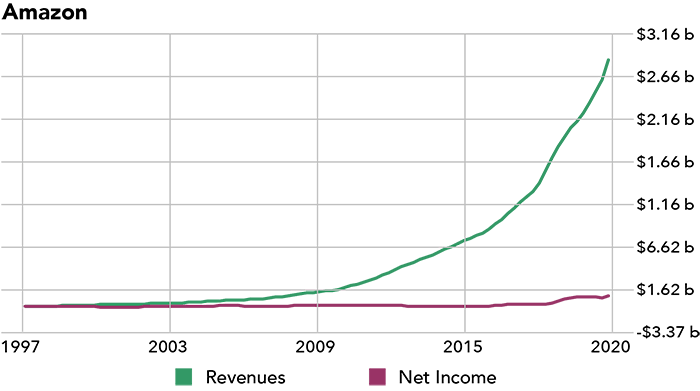 Its net income (basically, its earnings) has been flat, sure. But its sales growth has been astronomical.

Now, take a look below at the chart of the stock price. 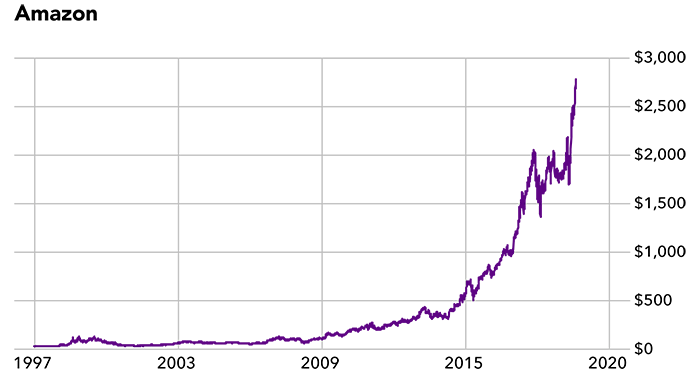 For the most part, the stock price follows the sales growth. Yes, there are exceptions like the market crashing in 2008, and it is definitely more volatile. But overall, the price of a stock follows SALES GROWTH, not EARNINGS.

Yet all you hear about from the experts in the media and on Wall Street are “earnings, earnings and earnings.”

So, Why Do I Bring This Up?

Well, because sales growth is a key number I will be talking about on Tuesday.

Focusing on this number will be crucial as the Super Bull situation unfolds … and it’s key to finding this year’s 50 stocks that will go up 1,000% or more over the course of a few years.

If you are looking for big capital gains, look at sales growth. It’s a number that could be the difference between slightly doubling your money or increasing it almost tenfold over the course of a few years.

Of course, as you will see during the Super Bull Summit, there are several other numbers I look at when it comes to spotting 1,000% winners in a matter of one to three years.

I can’t tell you how excited I am for you.

Regarding the Live Broadcast

Now, a few people have reached out saying they will not be able to make the 1 p.m. EDT live airing.

By all means, try to make it!

But if you can’t make it, we have a rebroadcast scheduled for 7 p.m. EDT.

So, a few housekeeping items:

Here’s What I Envision

As I write this note today, I’m envisioning you — one year from now — wealthier, looking over trading statements with 1,000% winners, with a giant smile on your face.

You’ve been told that gains like this are a pipe dream.

And on Tuesday, I’m going to be sharing my strategy for making these massive wins.

By the way, I’ve been reading ALL the texts you’ve sent Corrina since signing up. Thank you for these! It’s truly inspiring.